We couldn’t be more proud.  On Thursday night, October 5, 2017, the Nackey S. Loeb School of Communications awarded Right to Know NH its First Amendment Award. The award is given annually by the school to those who have “gone above and beyond to uphold” First Amendment Freedoms. 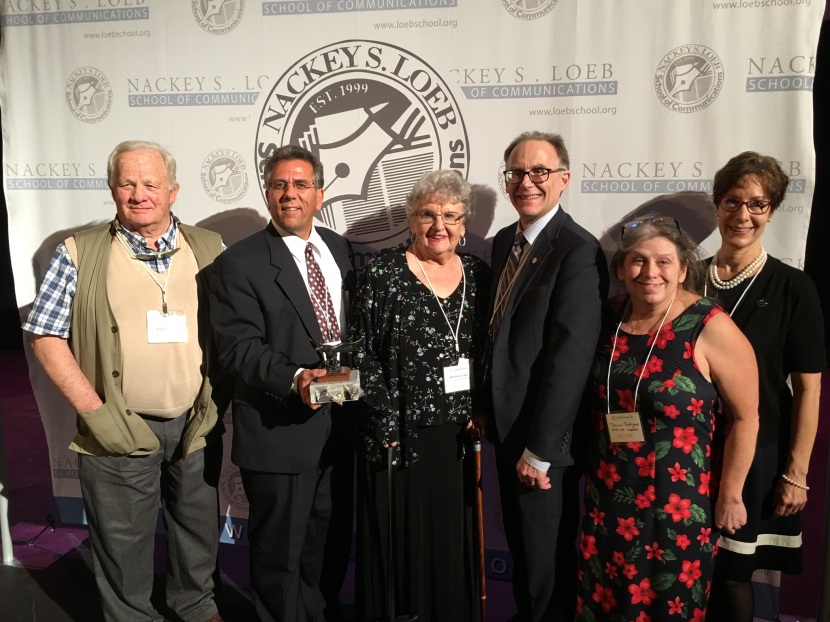 RTKNH, including founding members and officers Harriet Cady, David Saad and David Taylor were honored at a gala at the Palace Theatre in Manchester for its work in advancing the public’s right to know in New Hampshire.

A 5 minute video about RTKNH was shown at the award ceremony followed by a speech by David Saad,  RTKNH president.

The keynote speaker was Garrison Keillor, creator and star of “A Prairie Home Companion” radio show, who spoke of everyday threats to our First Amendment rights, not least of which is our own indifference and reluctance to act.

Since it began in 2013, Right to Know NH has been devoted to strengthening the Right to Know law in New Hampshire.  Through legislative action, education outreach and mentoring citizens in obtaining public information, the grass roots organization has grown to become a notable advocate for open government in the state.

We are honored to be recognized by the Nackey S. Loeb School and are delighted that attorney and First Amendment specialist, Greg Sullivan, was also recognized with the school’s Pen and Quill award.

The Nackey  S. Loeb School of Communications’ mission is to “promote understanding and appreciation of the First Amendment and to foster interest, integrity and excellence in journalism and communication.”